We are a young and enthusiastic team that loves electric mobility and the world of skateboarding. At Voltboards we managed to converge the two worlds in order to create a way of transport with eyes on the future. In the world we live in it is essential to have a fast, ecological and economical way of transport, which allows us to face the daily rush in an intelligent and practical way. We believe that with the Voltboards we are creating an innovative way to face the traffic of our cities, helping all our customers saving time in traffic or looking for a parking space, as well as money on fuel and insurances. This idea is what inspired us to create a skateboard brand that everyone can afford, with simple but sufficient features for the vast majority of users, offering an intelligent and fun electric skateboard.

Behind this passion for the world of skateboarding, is a team with more than 10 years of experience in the electric vehicle market, through our company Voltstore, founded in 2010. We are a company specialized in the sale and repair of electric 2 wheel vehicles, we are the national representatives and distributors of several renowned brands of e-bikes and electric motorcycles, responsible for placing several hundred electric motorcycles and bicycles on the market. Voltstore is a sub-company of our main company, MBA, a market leading marketing company based in Portugal.

Voltstore is located in Matosinhos, Portugal, a sunny paradise in the coast. In the southern part of Europe, surfing and skateboarding is part of our culture, it is usual to see hundreds of people skateboarding along the beach every day, in a natural and healthy environment! In addition to skateboards, many people ride bicycles, scooters, roller skates, among other ways of micro mobility.

With so many small vehicles circulating, we can increasingly see people riding electric skateboards, usually of very high quality, and consequently very high prices. Our mission is to create electric skateboards that are easy to use and transport, resistant, and, at the same time, affordable to everyone. Along with our experienced know-how in electric vehicles, we are proud to bring to the market our first VOLBOARDS model – the Fisherman!

Our focus as an electric vehicle company has been to try to build a future environmentally friendly and oriented to sustainability, where urban mobility will be based on micro-mobility, and most people will move around big cities in small vehicles such as skateboards, kick scooters and e-bikes – Powerful, affordable and full of exciting technology! 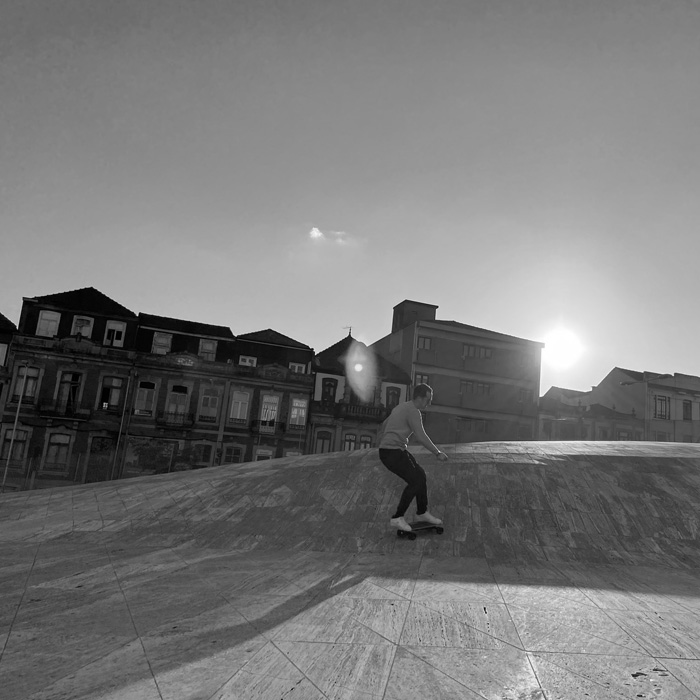 We are available to answer any questions you may have! Just get in touch with us by email or phone! Our products go
through several quality control points to make sure they always reach you in perfect condition!

We have extensive experience in repairing electric vehicles, and we have an after-sales service with specialized
technicians. If you have any problems, just contact us and we will give you the best solution.

You can purchase your skateboard from Voltboards in our online store with delivery throughout Europe! Just put your
country when you are finalizing your order to know the shipping cost.

We constantly make new partnerships with stores creating a network of points of sale, check in “contacts” the active
places where you can buy your Voltboards electric skateboard

HOW AN ELECTRIC SKATEBOARD CAN CHANGE YOUR LIFE

Day life in big cities is becoming more and more difficult to face, hours in traffic, more and more difficulty in finding parking spaces, the price of fuel always rising, expensive car maintenance and car insurance. There are many reasons why people are tired of cars, a lot of people choose to use public transport as an alternative, but not all cities have a viable public transport network, and those that do, are always limited, because they never leave you exactly where do you want to be.

This is where micro-mobility comes in, small electric vehicles, easy to transport, low maintenance and affordable prices! Among the wide range of micro-mobility vehicles available, electric skateboards are clearly the most fun and undoubtedly the most stylish. With an electric skateboard, you can exchange long hours in traffic queues for a fun trip to where you want to go. Thanks to the small but powerful engine, it will seem that you are always going downhill, moving with the surfing feeling through the streets of your city, arriving at places and taking your skateboard by the handle with you anywhere.

You can combine the use of your electric skateboard with public transport in the way you prefer, getting off at the stop you want and skating to your final destination. When you get home, just plug your skateboard into the plug and after a couple of hours you’re ready to do several more kilometers.

Without a doubt, a change in your life! 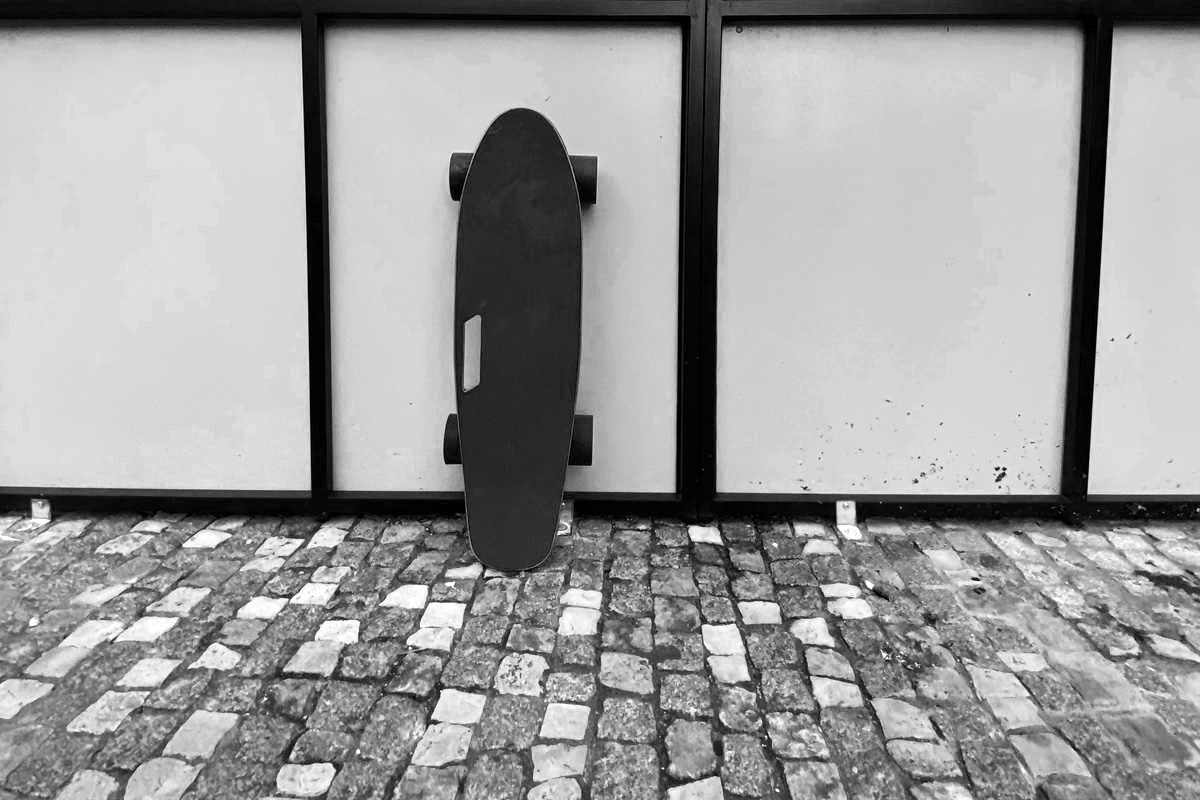 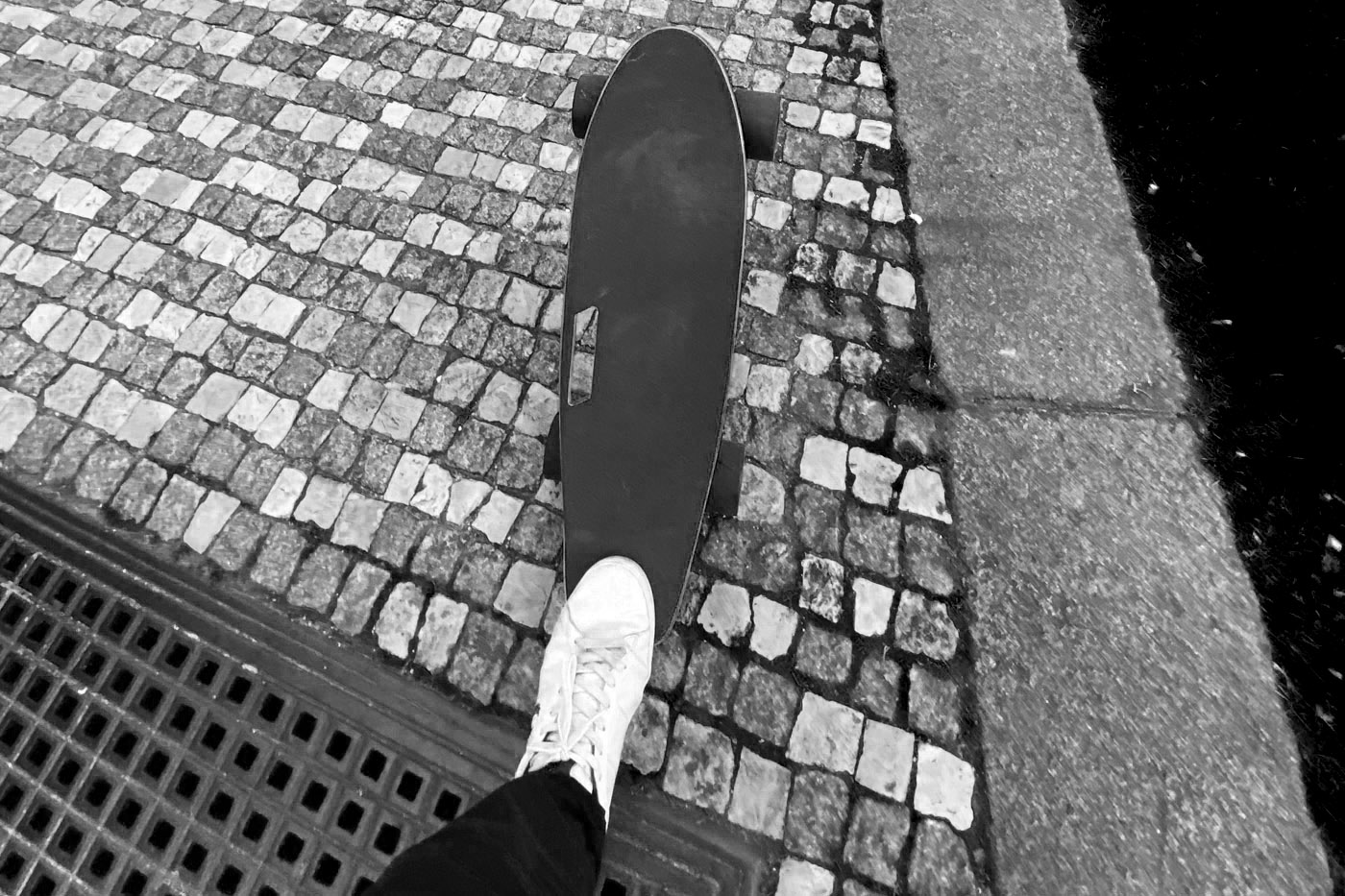 A REVIEW OF THE HISTORY OF ELECTRIC SKATEBOARDS

An electric skateboard is a personal transport vehicle, visually it is very similar to a normal skateboard, but it hides a powerful battery that allows the user to do several kilometers controlling the skateboard only with a remote control, usually wirelessly, by pressing the forward button to accelerate or pressing backwards for braking. To curve is exactly the same as a common skateboard, just lean your body to follow the trajectory you want. Electric skateboards are classified in the same category as electric kick scooters and can be used on the road legally in most countries, before buying one check if you can use an electric skateboard on the roads of your country!

The first report of a motorized skateboard was recorded back in 1975, in California, it was a skateboard equipped with a gasoline engine, although very fun it was banned in 1997 for being too noisy and polluting.

In the same year, in 1997, the first skateboard equipped with an electric motor also appeared, but spent several years in experimentation until it became a commercial product.

In 2012, electric skateboards began to reach the masses, already with a series characteristics that started to convince new users, today, according to “WantStats Research and Media Pvt. Ltd.” the Micro-Mobility market size is projected to be worth USD 210 Billion by 2030, registering a CAGR of 13% during the forecast period (2022 – 2030).

So you can expect to see several electric skateboards on the streets of your city, what a great time to be alive!

In the heart of Portugal!

How Can We Help?

For any question, problem or doubt, do not hesitate to contact us!

account
0 cart
We use cookies on our website to give you the most relevant experience by remembering your preferences and repeat visits. By clicking “Accept All”, you consent to the use of ALL the cookies. However, you may visit "Cookie Settings" to provide a controlled consent.
Cookie SettingsAccept All
Manage consent

This website uses cookies to improve your experience while you navigate through the website. Out of these, the cookies that are categorized as necessary are stored on your browser as they are essential for the working of basic functionalities of the website. We also use third-party cookies that help us analyze and understand how you use this website. These cookies will be stored in your browser only with your consent. You also have the option to opt-out of these cookies. But opting out of some of these cookies may affect your browsing experience.
Necessary Always Enabled
Necessary cookies are absolutely essential for the website to function properly. This category only includes cookies that ensures basic functionalities and security features of the website. These cookies do not store any personal information.
Non-necessary
Any cookies that may not be particularly necessary for the website to function and is used specifically to collect user personal data via analytics, ads, other embedded contents are termed as non-necessary cookies. It is mandatory to procure user consent prior to running these cookies on your website.
SAVE & ACCEPT